Castres coach Mark McCall insisted his side will still be determined to progress from the group stages of the Heineken Cup despite an opening round defeat to London Wasps on Sunday afternoon. [more] 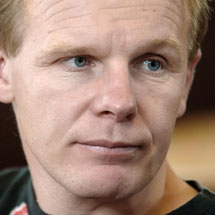 Castres coach Mark McCall insisted his side will still be determined to progress from the group stages of the Heineken Cup despite an opening round defeat to London Wasps on Sunday afternoon.

McCall, who joined the Top 14 side from Irish province Ulster last season, saw his side lose out 25-11 at Adams Park ahead of next weekend’s clash with Edinburgh in France.

“We worked very hard last season to get ourselves in a position to play in the Heineken Cup in a match like that against a team like Wasps,” said McCall, whose men drew the second half 8-8 after a nervous start in High Wycombe.

“We suffered from a lot of injuries early on in the French season but we were determined to bring the best squad that we could over here. We didn’t have the team that did so well for us last year but we brought the best that we possibly could."

McCall believes his side can take heart from their second-half performance as they turn their attentions towards an Edinburgh side still smarting from a comprehensive four-try defeat to Leinster.

“At 20-3 we could have caved in but we showed a lot of spirit. We were very pleased that we did that. It gives us a real eye opener for our players as to the kind of level Wasps played at today.

“We started the season with 15 or 16 of the 32-man squad unavailable, which is more normal for the end of the season than the start. Gradually, they’re all coming back and I think one of the reasons we were so blown away physically in the first half was that a lot of our players were playing their first fixtures.

“We’ve got some very important French Championship matches coming up and we need to get some momentum built into our season. On the back of a fighting performance today, we need to try and get a win at home against Edinburgh behind us. We’ll try and give it everything for the rest of our matches.”