Both England and Wales have suffered injury blows ahead of next month's autumn internationals. [more] 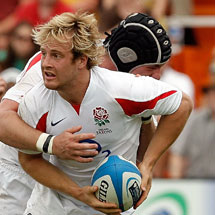 Both England and Wales have suffered injury blows ahead of next month’s autumn internationals.

Wales wing Mark Jones is unlikely to be fit for the match against South Africa on November 8, while England full back Nick Abendanon could miss his country’s entire four-match series.

Jones, who was part of the Grand Slam winning side earlier this year, picked up a knee injury during the Scarlets’ final match at Stradey Park last weekend.

"We’ll wait and see when he comes in on Monday, but I’d say he’s the one who’s very doubtful at the moment."

Bath youngster Abendanon was only recently called into Martin Johnson’s Elite Player Squad but an injury to his big toe on his left foot has seen him released back to his club.

The 22-year-old is expected to be out of action for between two to four weeks.

Despite the absence of Abendanon and Lewsey, Johnson has declined to call another full back into his squad for next Saturday’s game against the Pacific Islanders.

With Matthew Tait struggling with a hamstring injury, Delon Armiitage of London Irish is the only fully fit full back in Johnson’s squad.