Martin Corry may have joined the 2001 Lions squad as a late replacement but the Leicester and England back row left Australia as one of the stars of the tour. [more] 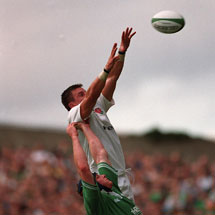 Martin Corry may have joined the 2001 Lions squad as a late replacement but the Leicester and England back row left Australia as one of the stars of the tour.

Having missed out on initial selection, Corry was busy representing his country in Canada when the call to join the Lions eventually arrived.

He went on to feature in all three Tests against the Wallabies as Graham Henry’s men came close to recording a series victory over the World Champions.

Here, Corry tells http://www.lionsrugby.com/ how he found out about his call up, why it made his Lions experience even more memorable and the repercussions for his family life!

Corry on receiving the good news

"I was called up on the Friday before we were due to play our second Test for England against Canada. I went down to breakfast and I was completely unaware of what was happening in Australia.

"I’m pretty grumpy the day before a game so I just got my breakfast and went and sat on my own with a paper. Then Clive Woodward came over and just said ‘Simon Taylor’s gone down injured and they want to fly you over as his replacement’. My mind just went into spin.

"I got the next flight I could out to Australia. The rest of the squad were up north in Townsville near Cairns in the middle of nowhere. I flew into Brisbane and I was waiting around in the airport for my connection to Townsville when I met a couple of Welsh journalists. They said ‘Congratulations’ and I thought they were congratulating me on my call up but they said I’d been picked to play on the Tuesday.

"With the date line and the travel, it was Monday already, so it was all a bit of whirlwind. Because it all happened so quickly, it never really had time to sink in."

On upsetting the future Mrs Corry

"My parents were actually out in Canada watching so I told them and they managed to get to Townsville before me, which was slightly odd. My wife had a bit of a different view though because, after we played Canada, I was due to come straight back as we were getting married that year.

"When  I got called up to the Lions, it meant I was going to get back just before the wedding which she wasn’t too happy about. It meant there was less organising for me to do when I got back, though, so I was delighted with it!"

Martin Corry impressed in Australia having not made the original squad

On the plus side of missing the original selection

"It did make it easier being called up late. There’s wasn’t any time to dwell on it. It was more a case of ‘How am I going to get to Australia, what am I going to do, is there going to be someone there to meet me, will someone be waiting for me?

"When I got there, it was literally a case of ‘Here’s your playbook. You need to learn this because you’re playing tomorrow.’ It was all a massive rush.

"With jet lag and everything, I didn’t really know where I was. I then played the Saturday as well so it was all about trying to focus on the games rather than thinking, ‘I’m on a Lions tour’."

Corry’s appearances as a 2001 Lion