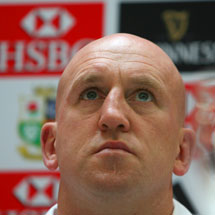 A Junior All Black earlier in his career, Flutey is set to win his first England cap after qualifying on residency grounds prior to the summer tour of his homeland.

"He’s the perfect professional in his preparation, a leader who is thoughtful in analysis of the opposition and vocal on the field when tactics have to be changed," said Edwards, who will be part of Ian McGeechan’s coaching staff when the Lions travel to South Africa next summer.

"A year ago he and (Danny) Cipriani were making magic, and their empathy has returned as Danny gets back to full fitness.”

Currently preparing for Wales’s opening autumn international against South Africa in Cardiff this Saturday, Edwards believes England’s half-back and midfield options will challenge the best the southern hemisphere can throw at them.

"Put Danny Care, the form scrum-half, inside them and you get a trio of all-court decision-makers who kick and distribute but who are all prepared to run the ball and thus command the constant attention of opposition back rows and midfields."