2005 Lions tourist Gareth Cooper believes he is the top scrum-half half in Wales after being selected for all three of his country's matches against the southern hemisphere giants. [more] 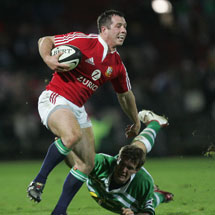 2005 Lions tourist Gareth Cooper believes he is the top scrum-half half in Wales after being selected for all three of his country’s matches against the southern hemisphere giants.

The Gloucester star has earned the No9 shirt ahead of fellow Lion Dwayne Peel and he intends to ensure it remains in his possession in the lead up to next summer’s Lions tour.

"I feel like I’m No1 again and I know if I play well this weekend, then I’ve got a big chance of playing in the Six Nations,” said Cooper, who starts for Wales against Australia in Cardiff on Saturday.

"It’s great to have the No9 shirt back and get a run of games in the side. There’s huge competition for places and always pressure to perform but it’s another chance to show I’m the boss."

Cooper, who will faces Welsh competition from Peel and Mike Phillips, the injured Osprey who helped Wales achieve Grand Slam glory earlier this year, had been in danger of missing the clash with the Wallabies as a result of a club versus country row.

Cooper had trained with Gloucester this week in preparation for Friday’s game with Northampton before the Welsh Rugby Union and the Guinness Premiership side finally reached an amicable agreement that allowed the 29-year-old to wear his country’s colours in Saturday’s international.

"I’ve played lots of games for Wales and I was the number one scrum-half in the world in 2003 but a lot has happened since then.

"I’m really flattered that Wales wanted me so much. I had a call from Alan Phillips (Wales team manager) after training on Monday to tell me I was available to play this weekend. When I heard the news, I was delighted."