Two more Springboks have been called into the Barbarians squad for next Wednesday's clash with Australia at Wembley. [more] 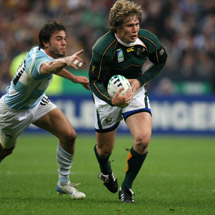 Two more Springboks have been called into the Barbarians squad for next Wednesday’s clash with Australia at Wembley.

Francois Steyn and Johann Muller will both appear for the invitational XV some 11 days after the end of the Boks’ UK tour.

Utility back Steyn and second row Muller have not featured as much as they would have liked for the world champions this month but both could well be facing the Lions next summer.

Front rowers Federico Pucciariello and Census Johnston have also been called up in place of Gurthro Steenkamp and Carl Hayman respectively.

The Babaas will announce their starting XV at 12pm this Monday, December 1.