Ian McGeechan made his final addition to his core Lions coaching staff on Thursday and the head coach is delighted with his choice. [more] 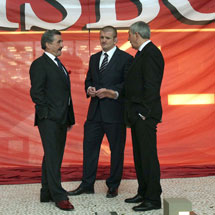 Ian McGeechan made his final addition to his core Lions coaching staff on Thursday and the head coach is delighted with his choice.

McGeechan, who leads the Lions on their tour of South Africa next summer, has appointed England’s Graham Rowntree as an assistant coach with particular responsibility for scrummaging.

"Graham has been a Lion. He knows what it’s all about and he knows what it takes to produce an environment that the forwards need to be playing in and training in," said McGeechan, who will be looking to emulate his series success of 11 years ago when the Lions return to the land of the Springboks.

"He’s always impressed me, not only as a person but also as a technical coach who will get the best out of the players. That is very important going forward."

Rowntree won over 50 caps for his country and made 12 appearances for the Lions, appearing in two Tests and playing an important role in two hugely successful mid-week sides in 1997 and 2005. For McGeechan, Rowntree’s understanding of the Lions ethos will be a critical aspect of a winning Lions squad in six months time.

"We need to be pulling together as a coaching team and his advice is going to be very important in getting the right chemistry and mix to make sure we have every opportunity of creating the environment that gives the players best chance to perform in a Lions jersey."

South Africa have long been renowned for their pride in their scrummaging ability and McGeechan knows that those tight exchanges are likely to be critical if the Lions want to return home with another victory over the reigning World Champions. Rowntree will therefore be focusing on all aspects of the scrum but McGeechan is keen to stress that his new addition’s role will be far more wide reaching.

"We felt it was very important that we had a technical scrummaging coach with the challenge that South Africa bring and the platforms that you want to play from," explained McGeechan.

"If the scrum can be as good as possible, then it gives you a start for the rest of the game. It’s important that, technically, we are astute and as prepared as we can be in that area. That does bring a lot of confidence to some of the other things you can do, particularly in forward play.

"Although, technically, the scrum is going to be Graham’s responsibility, he’s going to have a general impact on what we’re doing in training as a team, as a group of forwards, with Gats (Warren Gatland) and with me.

"We’re not going to be compartmentalised in what we do. There’s going to be a lot of things going into the mix and Graham compliments everybody who’s already there. That’s the exciting thing for me, that you can see someone adding something to the pot."