Star Lion could have been Super

Lions full back Lee Byrne could have been playing Super 14 rugby this season after impressing with Britain and Ireland's elite. [more] 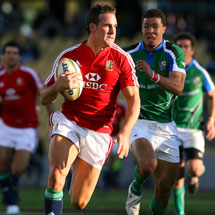 Lions full back Lee Byrne could have been playing Super 14 rugby this season after impressing with Britain and Ireland’s elite.

The Ospreys and Wales star was one of the most consistent performers in the lead up to the three-match Test series with his huge boot, confidence under the high ball and ability to create space seeing him win a starting berth for the first Test.

And, although injury ended his tour after that defeat in Durban, his performances did not go un-noticed by two of South Africa’s leading provinces.

It has been reported that both the Sharks and the Stormers were keen to keep Byrne in the southern hemisphere once the tour ended but the 29-year-old opted instead to continue his career at the Liberty Stadium in Swansea.

Byrne is thought to be determined to win more silverware with the Ospreys after a disappointing 2008/09 season that saw the glamour outfit fail to build on their 2007 EDF Energy Cup success.

Any move to South Africa would have also put great strains on his international career, with the former Scarlets player desperate to help his country return to the dizzy heights of their 2008 Grand Slam success.

Having missed out on selection for the 2007 World Cup at the last minute, Byrne is also hoping to play his part in the 2011 tournament – something that would have been far less certain had he chosen to switch hemispheres.