A full XV of Irish Lions 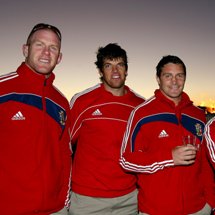 Kidney has named 12 players who toured with the 2009 Lions, plus another who missed out last summer but was involved in Sir Clive Woodward’s squad that travelled to New Zealand five years ago.

Jerry Flannery and Tomas O’Leary are also involved having recovered from the injuries that prevented them from touring South Africa after Ian McGeechan had named the pair in his original 37-man party last April.

Ulster club captain Rory Best is named in the squad despite being sidelined through injury. The experienced hooker has now returned to contact training and could be back in action sooner than originally expected.

Ospreys wing Bowe, who started all three Tests for the 2009 Lions, is the only member of the squad to play his rugby within the Magners League but outside of Ireland, while Leicester’s Murphy is the only Guinness Premiership player in the party.

Ireland kick off the defence of their 2009 Grand Slam when they face Italy in Dublin on Saturday, February 6, while the Ireland ‘A’ side face England Saxons and Scotland ‘A’ on January 31 and February 5 respectively.

The squad will train together in Limerick next week before an ‘A’ squad is named on January 26 ahead of the away fixture against England Saxons at The Recreation Ground in Bath.

Additional players outside of the 44 man squad named will be added to the ‘A’ squad to face the Saxons.

"When naming the squad, we had three main considerations, with the most important being the opening game against Italy, followed by the A games and further down the line the Rugby World Cup," said Kidney.

"Building a squad has always been a priority for us and the work done during the first half of the season means there is a little more experience accumulated in the squad then we had a couple of months ago.

"While there were new players who gained vital experience during the Guinness Series, the goal is to keep that experience ticking over with all the players who need international-level game time.

"By having the A games early, it allows us to get people on the pitch so they can keep their own performance levels up as we progress through to the later stages of the championship.

"The aim is now to continue that while trying to increase the competitiveness that we need for the Italy game. The provinces have all been in good form, making selection even more competitive, but we will need that for the big challenges that are ahead for the group over the next couple of weeks."