Lions tourist Andy Powell has apologised after being arrested following the second round of the 2010 Six Nations. [more] 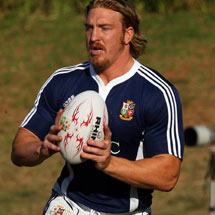 Lions tourist Andy Powell has apologised after being arrested following the second round of the 2010 Six Nations.

The Cardiff Blues and Wales No8, who toured South Africa with the Lions last summer, has been charged with drink driving.

Powell allegedly drove a golf buggy from the Welsh team’s Vale of Glamorgan Hotel and was intercepted by police at services just off Junction 33 of the M4.

The 28-year-old was arrested with another un-named man at 6am, with a police investigation into the incident now underway.

Powell’s agent, former Lions and England prop Mike Burton, told the BBC that his player was "very sorry and embarrassed about what happened".

"Andy was disappointed and embarrassed to find himself in this position," added Burton.

"He does not excuse or condone drink driving in any form and it was a misjudgment.

"He is sorry and he will face up to it."