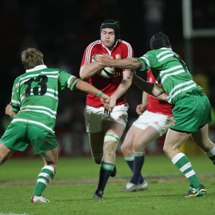 Powell, who toured South Africa with Gatland and the Lions last summer, was arrested after allegedly driving a golf buggy to a service station just off the M4 in the early hours of Sunday morning.

The 28-year-old Cardiff Blues star has since been kicked out of the Wales squad and Owen admits it was the outcome that he, and many others, expected.

"Warren brought Andy into the team and gave him his chance at international level,” said Saracens backrower Owen, who captained the Lions against Argentina at the Millennium Stadium five years ago.

"Andy had taken his chances on the pitch when they were given to him so I’ve no doubt Warren will feel let down.

"On the back of all the furore surrounding ethics in rugby at the moment, after things like ‘bloodgate’, I expected Wales to come down quite harshly on him.

"Andy will just have to take it on the chin."

Those sentiments have been echoed by Rowlands – a man who knows exactly how much of an impact the incident will have had on the Welsh management.

After becoming the youngest ever coach of Wales when he took the reigns in 1968, Rowlands managed the Lions on their triumphant tour of Australia in 1989 and in their clash with a Rest of the World XV in 1986.

And experience tells Rowlands that Gatland had little option but to remove Powell from his squad for the immediate future at least.

"It is impossible to defend Andy no matter how much of a nice guy he is off the pitch,” said Rowlands.

"Such behaviour is not acceptable from anyone, let along a member of the national rugby squad.

"I would have done exactly the same thing as Warren if I was coach because you need to show the other players you expect them to behave appropriately.

"His actions have taken the gloss off a sensational Wales comeback (against Scotland) and people are talking about what Andy Powell has done and not the heroics of players like Shane Williams.

"Powell shouldn’t play for Wales again this season and that would also rule him out of the tour to New Zealand.

"With a World Cup around the corner this could have very serious consequences for him. It was such a stupid thing to do."