Rod Macqueen says the newly-formed Melbourne Rebels set-up has similarities to the make-up of a British & Irish Lions squad. [more] 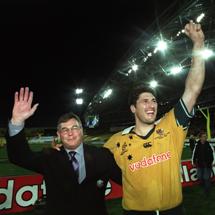 Rod Macqueen says the newly-formed Melbourne Rebels set-up has similarities to the make-up of a British & Irish Lions squad.

The Australian outfit will take part in next season's Super 15 alongside the best sides in the southern hemisphere.

Rebels boss Macqueen, who was coach of Australia when they defeated the Lions with a 2-1 series victory in 2001, is in the final stage of putting his 30-man squad together but insists his recruitment has not just been about bringing the best players to the new club.

"It is similar to the Lions in some ways as you need to combine experience with youth but at the same time, build a culture,” said Macqueen.

"The main difference between the two is that the Lions is a one-off tour and then they break up whereas the players who join us will form a long-standing culture and tradition for the Rebels in Melbourne.

"For that to happen, you don't just sign up the best 30 players – like the Lions where they pick a midweek team.

"You need some intelligent players because you are building a new side and then you also need to mix that with courage and leadership from day one with people who will give input into the team.

"The players have to get that right. It's a great yet unique opportunity in club rugby. When you start afresh, you have the chance to see how you want to play and then select the players and athletes to fit the gameplan."

The Rebels have already signed 10 players with leadership qualities from their previous clubs.

And 1999 World Cup winning Wallabies chief Macqueen has revealed that drive was one of the main reasons why he chased after the signatures of Wales No8 Gareth Delve and England flanker Michael Lipman.

"Gareth sits in very well with the ethos. He is a captain, he’s very well thought of and he’s a good runner with the ball and he’s up for a challenge late in his career which is excellent,” added Macqueen.

"We were told that he was looking for an opportunity and we’ve done quite a lot of homework on him. He was the ideal type of person for what we are looking for.

"Michael too has always been a leader with captain roles at Bath and now Warringah in Sydney and I believe he will be a fantastic acquisition to the club.

"We won't have the luxury of time to develop into a great side within three years. We have to be competitive from the off."