World No 1 spot on the line

John Smit's Springboks will open the defence of their Tri-Nations title in Auckland on Saturday with world domination the only thing on their minds. [more] 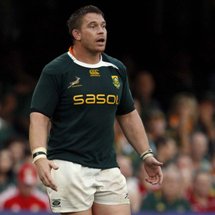 John Smit’s Springboks will open the defence of their Tri-Nations title in Auckland on Saturday with world domination the only thing on their minds.

Already the reigning Rugby World Cup champions, as well as victors in the three test series against the British & Irish Lions last year, the Boks need only to beat the All Blacks to overtake them and reclaim the top spot on the IRB World Rankings.

South African rugby is in a pretty good place at present following their Tri-Nations triumph last year and that Lions series victory. The Bulls have also own back-to-back Super 14 titles and this year’s final was an all-South African affair.

But Smit will know that Richie McCaw’s All Blacks, who overtook the Springboks in the world rankings last autumn, will have a point to prove after losing three times to the world champions in last year’s Tri-Nations.

One of those defeats came in New Zealand, 32-29 in Hamilton, and the other target in sight for Smit and co is to notch a third successive victory in the land of the long white cloud for the first time in their history. They were 30-28 victors in Dunedin the year before.

This time the game will be in Auckland, where the All Blacks have a mighty record. They boast a 20 match winning streak that goes back to 1995 at Eden Park and have only suffered one defeat there in 33 games over the past 23 years.

The Springboks have to go back 73 years for their last victory at the ground, yet Smit’s men will go into the contest as firm favourites. They currently trail New Zealand by 2.22 rating points in the IRB World Rankings, but any kind of victory will see them return to the summit for the first time since November 2009.

“Winning away from home is always hard and playing at big fortresses like Eden Park just makes it harder. But any away win helps and it creates the belief that you can do it again,” said Smit.

“If you add accuracy and execution to that belief, then you can sometimes get a win in places like this. When you're playing at home, you can get away with some things and history is clear that home ground advantage does play a big role.

“Our mission is to get into the face of the opposition and that's how you create space. We want a good result in all the set-pieces, but that's easier said than done.”

The All Blacks have beaten Ireland and Wales twice in their build up to the Tri-Nations and, most importantly, have a fully fit Dan Carter back to his scintillating best. A year out for the 2011 Rugby World Cup, McCaw’s men know the next two weeks at home will be crucial to their short and long term plans.

“We want to start off differently to last year and there's a fair bit of desire to do that. Last year we went into the Tri-Nations without a totally settled plan because we were getting personnel back like myself and for the first three weeks we felt like we didn't really have a base to build from,” said McCaw

“We're in better shape, we've played good rugby in the last three weeks. I certainly feel a lot better than last year, when I came into the Tri-Nations without many games behind me.”