Lion back in the game 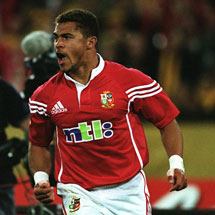 Robinson retired from the playing side of the game in 2008, taking a year off before returning to Sale Sharks as head coach last season.

The World Cup winning wing left that role in May and has now agreed to join the National Two North side in a shock move.

"I am absolutely delighted that we have signed Jason for next season. Given his record in both codes of the game, it's not an exaggeration to say that he is the best ever rugby player,” said Fylde head coach Mark Nelson.

”It's a fantastic opportunity for our players to play alongside such an experienced and mercurial talent and I expect a number of players will express an interest in joining the Club to have a similar opportunity."

Robinson scored a remarkable five tries on his Lions debut against a Queensland President’s XV nine years ago and featured in all three Tests in Australia plus two more in New Zealand.

The 35-year-old will link up with ex-England coach Brian Ashton – the man who led England and Robinson to the World Cup Final in 2007 – after Ashton agreed to return to the Woodlands outfit as a coaching consultant.

“It is a remarkably fortunate coincidence for me to be returning to help out my old club Fylde as Jason arrives to play,” said Ashton.

”I have had the privilege of working with Jason and know that his stature, ability and qualities as a player and a person will benefit all who come into contact with him, both on and off the field.”