Weepu steps in for Cowan

Graham Henry has made one change to his run-on team for his side's second Tri-Nations shoot-out with arch-rivals Australia in Christchurch this weekend. [more] 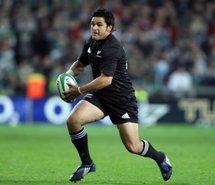 Graham Henry has made one change to his run-on team for his side’s second Tri-Nations shoot-out with arch-rivals Australia in Christchurch this weekend.

Hurricanes scrumhalf Piri Weepu comes up off the bench to replace the injured Jimmy Cowan, while his uncapped Wellington clubmate Alby Mathewson takes his place among the replacements.

Benson Stanley replaces Israel Dagg on the bench in the only other alteration to the side that hammered the Wallabies in Melbourne last weekend. That 49-28 triumph made it eight wins in a row for the All Blacks against Australia, leaving them one short of equaling the record run of nine between 1936-1947.

Henry knows that if his team can continue their recent form – they have maximum points from three games to date – they should regain the Tri-Nations title for a 10th time in the 15 year history of the top southern hemisphere competition.

In fact, with the reigning champions, the Springboks, pointless after three matches, Henry’s men can clinch the title, and the Bledisloe Cup, by securing another five pointer and stopping the Wallabies from getting a bonus point.