Lions full back Lee Byrne has expressed his sadness at the sudden retirement of Scotland's Thom Evans. [more] 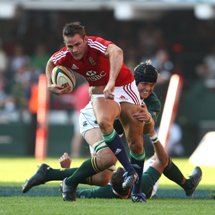 Lions full back Lee Byrne has expressed his sadness at the sudden retirement of Scotland’s Thom Evans.

The Scottish wing collided with Wales star Byrne during the Six Nations tie in Cardiff six months ago but has called time on a promising career as he attempts to recover fully from a serious neck injury.

Evans severely damaged two vertebrae in the sickening clash and was forced to hang up his boots on medical advice at the tender age of 25 last month.

The former Glasgow Warriors flier has watched the tackle again on television and admits no blame should be attached to Byrne. But the 2009 Lion has spoken about the incident on February 13 for the first time to reveal his sympathy towards rising star Evans.

"It was obviously really sad and disappointing when I heard the news that Thom has had to retire from the game. I wouldn't wish that on any player at all,” said Byrne.

"I managed to get his number after we played Scotland through his brother Max and after a couple of texts, I rung him up to have a chat.

"The first thing I wanted to do was have a chat with Thom because I didn't want there to be any bad feeling between us. It was a pure accident.

"But I suppose it does unfortunately show that injuries like that can happen in this sport."

Evans lay motionless at the Millennium Stadium for 10 minutes and required emergency spinal surgery in the Welsh capital.

Initially, there were hopes of a full sporting recovery before doctors advised him against a return to the game.