Mighty Moss will never be forgotten

Moss Keane, the legendary Irish second row who toured with the British & Irish Lions in New Zealand in 1977, has died at the age of 62. [more] 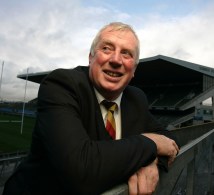 Moss Keane, the legendary Irish second row who toured with the British & Irish Lions in New Zealand in 1977, has died at the age of 62.

Keane played in 12 matches for the Lions in 1977, winning a place in the first Test pack against the All Blacks at Wellington’s Athletic Park in a 16-12 defeat. A larger than life character, he was at the heart of the Irish pack for a decade and ended with 51 caps for his country.

Having lost to New Zealand with the Lions, he gained ample revenge a year later when he helped Munster beat the All Blacks at Thomond Park. That, as much as any other of his achievements in the sporting arena, earned him cult status in Ireland.

A convert from Gaelic football, Keane played for Kerry at Under 21 level and won Sigerson Cup honours with UCC before switching to rugby. He made his Irish debut against France at Parc des Princes in 1974, packing down alongside Lions great Willie-John McBride in the second row, becoming the first Kerry-man to play rugby for Ireland.

That was the only match lost by Ireland that season, 9-6, and a home draw against Wales, and victories over England at Twickenham and Scotland in Dublin, earned them the Five Nations title for the first time since 1951.

In 1979, he was in the Irish pack that laid the foundation for a 2-0 series win over the Wallabies in Australia and in 1982 he helped Ciaran Fitzgerald’s side to clinch the Triple Crown for the first time since 1949. The following season only a defeat in Wales stopped Ireland from repeating their success, although they did share the Championship with France.

Keane is survived by his wife Anne and his two daughters Sarah and Anne-Marie.