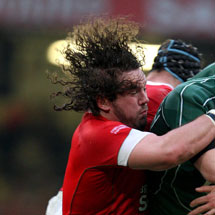 The Wallabies front-row were on the back foot against the All Blacks last weekend, with their potent back three and devastating back-row receiving all the plaudits for an historic win in Hong Kong.

"I wouldn't say their front row struggled," said Jones, who was a Test Lion in South Africa the summer before last.

"New Zealand were on the front foot but they didn't drill them or put them under too much pressure. It was only free kicks that Australia were giving away.

"Over the last couple of years they've put a lot of work into that department. The two Bens (Robinson and Alexander) are very good and have brought the scrum along, as well as Stephen Moore. I don't think it's a weakness for them anymore.

"There's been a lot of talk about David Pocock but I think the rest of their pack are just as good. Nathan Sharp is a very experienced player.

"But we want to secure our own ball comfortably and put as much pressure as we can on their ball. It's a case of getting solid ball and disrupting theirs.

"You can still dominate a game psychologically and physically impose yourself on the opposition during scrum-time."

Jones believes the Welsh pack are reaching their best and have what it takes to silence the Wallabies back-row and starve their backs of ball in their opening autumn international in Cardiff.

"A lot of us have played together for years now. Boys like Bradley Davies have come through – he has taken to it like a duck to water," added Jones.

"We have a pretty big front five. Matthew Rees is big for a hooker, the two second rows are big boys and then you've got Gethin Jenkins and we all now what he's capable of.

"We've a lot of experience and that goes a long way. The two second-rows are quite young but are physically big and have the mental attitude of a seasoned campaigner.

"In the front row we're getting on a bit and reaching our peak. If we can use the set-piece as an attacking platform then we will.

"Boys like Bradley, Alun Wyn Jones and Smiler (Rees) are big ball carriers but we are all comfortable with the ball in hand and, if we need to move it, we can move it. We're big and even I'm mobile!"