Edinburgh's Greig Laidlaw could make his international debut this weekend after winning a late promotion to the Scotland 22 to face the All Blacks. [more] 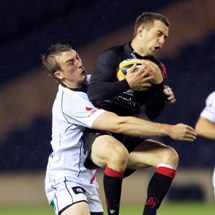 Edinburgh’s Greig Laidlaw could make his international debut this weekend after winning a late promotion to the Scotland 22 to face the All Blacks.

Laidlaw has been added to the replacements bench after Gloucester’s Rory Lawson was forced to withdraw through injury.

The 25-year-old scrum-half will act as back up for Lions tourist Mike Blair, who is set to skipper Scotland against the number one ranked side in the world on Saturday.

Laidlaw has featured in seven of his club’s Magners League matches so far this term, starting the home wins over Aironi, Ulster and Treviso.

"You feel for your team-mate in a situation like this, but it's clearly a great chance for me and one I'm determined to take if I get game time," said Laidlaw, a nephew of ex-Scotland and Lions No9 Roy Laidlaw.

"This is obviously disappointing for Rory but there's now an opportunity for Greig, who is tenacious and fiercely competitive and has shown the skills and mindset on his appearances for Scotland A and Scotland Sevens and on his performances for Edinburgh to underline his credentials," added Scotland head coach Andy Robinson.

Robinson includes four Lions in his squad to face the All Blacks, with prop Euan Murray, hooker Ross Ford and captain Blair all named in the starting line up and lock Nathan Hines selected among the replacements.

Murray and Blair are among five changes from the side that started the second Test win over Argentina in the summer, with the Northampton tighthead coming in for Glasgow’s Moray Low and Blair starting at No9 instead of Lawson.

“It is imperative that we front up from the first whistle against the All Blacks on Saturday and play the game at a tempo where we can unveil our skills and show our discipline, because the winning of this Test match is in our hands,” continued Robinson.

“We have shown our appetite to drive forward our game and our aim is to improve on our best performances last season, which we know inspired the country.

“As someone who loves his rugby it’s been a real thrill to watch many of New Zealand’s games this year and, for me, it’s important that this month the Scotland team earn the respect of the southern hemisphere by the qualities we bring to bear.”

Scotland face the All Blacks, Springboks and Samoans at Murrayfield this month as they look to build on a famous win over Ireland at Croke Park and an historic series triumph over the Pumas.