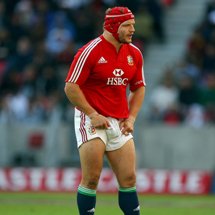 The Scotland prop left Northampton Saints by ‘mutual consent’ earlier this month but the Falcons have quickly snapped him up.

“It's a great move for me and my family,” said Murray. “It was certainly a challenge to get up the A1 but I'm delighted to be here.

"I've heard very good reports about Newcastle and what the club is looking to do, so this was the best option for me."

"This is a massive club with a lot of ambition and I can't wait to get stuck in and help the team get up the league and achieve some success. I've heard it's a lovely area and it's right on the coast which is another bonus.

"Alan Tait made it clear that he really wanted me here and it was a club that I felt would get behind me in a way that I could give my absolute all for, and that's what I want to do here.”

The devout Christian, a Lions tourist in 2009, refuses to play on Sundays and it is thought that was part of the reason for parting company with Northampton. But Newcastle head coach Tait does not see it as a problem.

“Our preferred time to play is Friday night,” said Tait – a member of the victorious Lions squad that toured South Africa in 1997.

"While some games do get moved for television, we'll have Euan available for more games than we would most current international players."

Murray made the move to Franklin’s Gardens in 2007 but has found opportunities limited this season due to the form of Brian Mujati. Murray had also attracted interest from Bath and Scarlets.