A likely opponent for the 2013 Lions is set to bounce back bigger and better thanks to a lengthy lay off. [more] 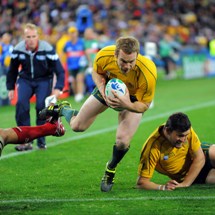 A likely opponent for the 2013 Lions is set to bounce back bigger and better thanks to a lengthy lay off.

Wallaby centre Pat McCabe is currently recovering from shoulder surgery but he is convinced he will return to action an even more complete player than before.

The 23-year-old’s rise to prominence effectively signalled the end of Matt Giteau’s stellar Test career, prompting the Australian media to promote him as the next big thing for the Green and Gold.

McCabe’s progress has since been halted as a result of the serious injury he picked in the World Cup win over the United States back in October.

Already out of action for 11 weeks, McCabe has no definite date set for his Super 15 comeback with the Brumbies.

But despite the disappointment of an enforced spell on the sidelines, the versatile youngster is remaining positive as he gets set for a massive 18 months ahead.

"It's frustrating having to watch the boys training but it's been a good chance to get stronger and fitter so hopefully I'll hit the ground running once I get back out there," said McCabe.

"The shoulder is feeling good. My strength is improving all the time and I feel like I'm getting back to where I want to be.

"Dean (Brumbies Athletic Performance Director Dean Benton) has been great for my recovery. I've come a long way since returning to Canberra and although there is plenty of hard work to get through from here I feel like I'm on the right path."