Tight at the top

One of the contenders for the Lions coaching job believes there is little between the four Home Nations ahead of the RBS 6 Nations. [more] 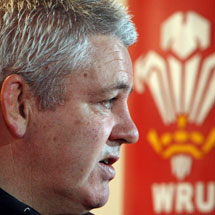 One of the contenders for the Lions coaching job believes there is little between the four Home Nations ahead of the RBS 6 Nations.

Wales boss Warren Gatland is convinced the tournament is wide open thanks to the improvements made by the Celtic countries in recent years.

Gatland, who was an assistant coach on the 2009 Lions tour of South Africa and is in the running for the top job in 2013, insists almost any of the six teams could be crowned European kings this spring.

“What’s great about the Six Nations is that a few years ago everyone just talked about France and England and how they were so far and above everyone else and that the Celtic nations didn’t have a chance,” said Gatland.

“I think it’s very exciting that there’s no clear favourite and any one of four or five teams are capable of winning it. I think it’s great for the game.

“Look at the last four years – the 6 Nations has been won by four different sides (Wales in 2008, Ireland in 2009, France in 2010 and England in 2011). And those four sides are probably on their day all capable of beating each other.

“So I think between England, France, Ireland and ourselves, there’s not a lot in it. And there’s no disrespect to Scotland because they are also capable of beating anyone on their day as well.”

Gatland’s Wales begin their campaign against Ireland in Dublin on Sunday, February 5 and the New Zealander knows just how important a victory at the Aviva Stadium will be to his side’s chances of overall success.

Wales last won in the Irish capital on their way to a Grand Slam in Gatland’s first season in charge in 2008 and a repeat of that Triple Crown clinching victory would be a major boost ahead of the home tie with Scotland, an away game against England and then two more Millennium Stadium fixtures against Italy and France.

Gatland has seen his side lose their opening game in the last two 6 Nations, immediately slipping behind the eight ball and eventually finishing fourth in the table on both occasions.

“The Six Nations is a tournament about momentum,” he said.

“Our first game against Ireland is hugely important. It’s away from home but if you win that and you get on a roll, you become difficult to beat.

“We came away from the World Cup having earnt a lot of respect from the New Zealand public and we have to be at excited looking forward to this 6 Nations and to the 2015 World Cup.”