Losing not an option 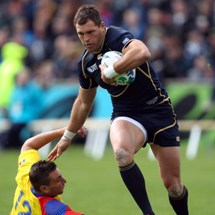 Sean Lamont says he is sick and tired of Scotland’s unlucky losers tag.

The Scots were narrowly beaten by both England and Argentina in the recent World Cup and have suffered a series of near misses in the past in the past three 6 Nations.

Andy Robinson’s men begin this year’s tournament with a home tie against the Auld Enemy and Lamont is desperate to turn promising performances into a win of any sorts.

"It was standard stuff against England at the World Cup – missed chances, we should've, could've, would've," said Lamont, who starts at inside centre at Murrayfield on Saturday.

"Myself and all the boys are sick of saying that. I'd rather just have the win.

"Scotland have had a lot of the old gallant runners-up. It doesn't wash any more. It's time to put Ws on the scoresheet.

Scotlandhave struggled to score tries on a regular basis since winning the last 5 Nations Championship back in 1999, a fact not lost on their critics.

Robinson’s troops have been creating plenty of chances of late but points have been hard to come by.

The selection of Dan Parks at fly-half suggests his boot could be the major supplier of scores on Saturday but Lamont isn’t fussed how  the points are picked up, as long as they lead to a win.

"Because we've had such good kickers over the years, when teams give away penalties, we nudge over the points," added the 31-year-old Scarlet.

"Tries make it easier, but whenever we get into the 22 we've been coming away with the points, which in tight games can make a big difference.

"Yes, it would be nice to be scoring pretty tries. But I'd still take an ugly win with a 3-0 victory without any pretty rugby against a loss.

"I'd rather go for the functional, the one that works and the simple stuff that will get us a win."