Lions hopeful Gareth Delve is adamant his move to Melbourne Rebels has been a huge success despite his absence from the Test scene. [more] 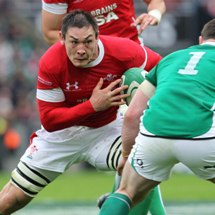 Lions hopeful Gareth Delve is adamant his move to Melbourne Rebels has been a huge success despite his absence from the Test scene.

The Wales back row, who moved to Australia in the summer of 2010, was overlooked for last autumn’s World Cup in New Zealand despite being part of Warren Gatland’s wider training squad.

Delve didn’t get any game time in the lead up to the global gathering in New Zealand and hasn’t been required by his country in the December clash with the Wallabies or their Six Nations wins over Ireland and Italy and Saturday’s mouth-watering match up with England.

But while the 29-year-old admits he’s disappointed not to have been given another shot at making it on the big stage following an injury-ravaged career, he stands by his decision to head Down Under.

''These things happen. 'Wales did fantastically well in the World Cup and the guys have kicked on since then so it's well done to them,” was Delve’s pragmatic assessment of how his international career seems to have come to a halt as the Lions step up preparations for their latest tour.

“These last two years have been about coming down and really broadening my horizons.

''I've lived in an absolutely brilliant city and made hundreds of new friends and played for a fantastic club in a great competition.

''On the whole, I knew it was a massive risk. I did hope it would pay off because I do feel that it's been good for my rugby and my development as a person as well but selection comes down to people's opinions and there's only so much you can do to affect that.”

Delve has been named vice-captain for the Rebels who are on the eve of their second season in Super Rugby.

The tournament’s newest franchise have a bye for the opening weekend of action but begin their campaign with a home game against the Waratahs a week today.