Harris – I’m more than a boot 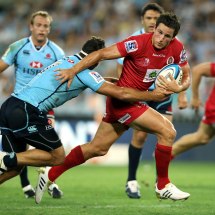 The former North Harbour fly-half switched to Australia to pursue Super 15 rugby with the Reds.

Harris was given the daunting task of filling the boots of flamboyant play-maker Quade Cooper, who remains sidelined following knee surgery, and has shone for very different reasons.

The Kiwi recruit has slotted a Super Rugby-record of 24 successful shots at goal in a row from the past two seasons – including 13 penalties from this year's wins over NSW Waratahs and Western Force.

He has been tipped for a call-up to the Australia set-up and could even face the Lions next year.

But Harris is determined to show he can also be an attacking threat.

"I don't want to be seen as just a goal-kicker but, if teams are going to intentionally slow our ball down, then it's nice to be able to punish them for their sins," Harris told AAP.

"It would be nice to put a few more tries on the board."

The Reds have scored just three tries with Harris at No.10 and the back-line have flattered to deceive.

But Harris is growing frustrated at the negative tactics of opposition sides "cheating" at the breakdown.

"It would be quite nice to see a couple of yellow cards come out early for intentional infringements," added Harris.
"I think some teams are intentionally causing trouble, especially out wide in the 22.

"If players started having a rest for 10 minutes then it would speed the games up and allow us to play and hopefully score more tries, which everyone wants to see.

"I'm not bagging referees but it would be good to make teams pay for what they're trying to do."