The Irish Rugby Football Union are on the lookout for a specialist scrum coach. [more] 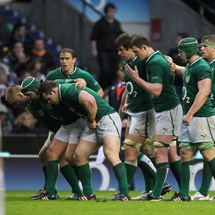 The Irish Rugby Football Union are on the lookout for a specialist scrum coach.

Declan Kidney’s men were second best by a long shot in the setpiece in their 6 Nations defeat to England on Saturday.

Ireland conceded a penalty try and were penalised by referee Nigel Owens on no fewer than nine occasions at scrum time in the 30-9 thrashing at Twickenham.

The loss of starting tighthead Mike Ross to injury just before the interval made a tough job even tougher for the Ireland eight, with replacement Tom Court struggling to steady the ship.

The Irish Rugby Football Union made the decision to advertise for a high performance scrum coach three months ago but the move has only just been publicised.

While the new scrum coach will work with under-age teams across the four provinces and have no initial involvement with the senior side, the timing of the advertisement has further highlighted an area of weakness in the Irish game.

And regardless of who takes up the newly created post, Kidney has admitted that his biggest worry is a distinct lack of depth when it comes to top-notch tightheads.

The first-choice No3s at Ulster and Munster are both foreigners in All Black John Afoa and Springbok BJ Botha, leaving Kidney with limited options in terms of international selection.

"Tom Court came on and went valiantly, but our balance was off," was Kidney’s assessment after Saturday’s debacle.

"That was always on the cards because we have guys who don't have huge tighthead experience playing for Ireland at the moment.

"It's something we'll have to work on and bring more Irish guys through."