Saracens' South African No8 Ernst Joubert says he is keen to play for England. [more] 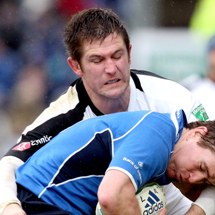 Saracens’ South African No8 Ernst Joubert says he is keen to play for England.

Joubert qualifies on residency grounds at the end of June having spent close to three years with the reigning Aviva Premiership Champions.

His form on the domestic scene has been one of the key factors behind Sarries’ remarkable rise and he has unsurprisingly been linked with a step up to the international scene.

And now the former Golden Lions star admits it would be a dream to play for a country he now considers home.

"It's out of my hands totally but I would very much like to be considered by England, which is my home now," Joubert told The Daily Telegraph.

"I love it here, I have played my best rugby here and my part of the equation is to be fit and to be playing well enough to maybe considered.

"I nipped over to Paris for the day with (Saracens owner) Nigel Wray to watch England beat France at the Stade de France and was inspired by the occasion and the way England played.

"I thought Ben Morgan was fantastic at No8 for England. There is nothing to say I would even be needed in the squad but I will definitely be available."

Joubert doesn’t qualify for England until after the summer tour of South Africa but he would be free to play in the autumn internationals against Fiji, Australia, South Africa and New Zealand.

New England boss Stuart Lancaster largely favoured youth in the recent 6 Nations campaign but, if he does decide to hand the 31-year-old a first cap, Joubert would join a host of other foreign-born players in the England camp.

Sarries team-mates Mouritz Botha and Brad Barritt were also born and raised in South Africa, Manu Tuilagi is originally from Samoa and Dylan Hartley grew up in New Zealand. There are others who were born outside English shores as well, while the likes of Riki Flutey, Shontayne Hape and Thomas Waldrom have also represented their adopted country over recent seasons.