Hape’s career could be over 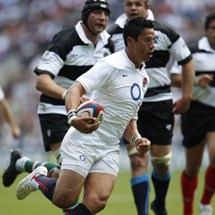 England centre Shontayne Hape’s career is hanging in the balance.

The 31-year-old London Irish star has been ruled out of the remainder of the season with a knee injury.

Hape has been troubled with knee problems throughout his career and director of rugby Brian Smith admits the latest setback could bring his playing days to a premature end.

“Shontayne has got a potentially career-ending knee injury so he won’t be playing for us for the rest of the season,” said Smith.

“He has got decisions to make now as to whether he tries to play again. He is seeking medical advice.

“He has had knee reconstructions and my understanding is that he is looking at heading over to the United States to try to rehab his knee, then he will make his call as to whether he will play again.”

New Zealand-born Hape, who won 13 caps for England after qualifying on residency grounds, also missed the end of last season with a knee injury.

He was out of action for most of 2007 as a result of cruciate ligament damage during his time with rugby league outfit Bradford Bulls and his now current situation could force to announce his retirement from the game.