The power of speech (iii)

In the third instalment of our power of speech series, we've picked out a few of our favourite speeches from recent tours and one from a little further back in time. [more] 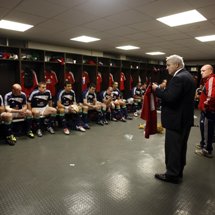 In the third instalment of our power of speech series, we’ve picked out a few of our favourite speeches from recent tours and one from a little further back in time.

In the third instalment of our power of speech series, we’ve picked out a few of our favourite speeches from recent tours and one from a little further back in time.

All four show just what the Lions means to those involved; all four show just how passionate those who represent the red jersey are and always will be; and all four demonstrate the desire to be respected by supporters from home and critics abroad.

They give us an insight into what goes on inside the pride during one of the greatest sporting shows on earth and they remind us just how unique the Lions brand really is.

And while actions undoubtedly speak louder than words, the passion shown by Jason Leonard, Lawrence Dallaglio, Carwyn James and Warren Gatland act as a reminder that representing Britain and Ireland’s elite remains the ultimate achievement this side of the equator.

After starting both the second and third internationals in New Zealand in 1993, Leonard arrived in South Africa four years later as a senior hand.

He surprisingly missed out on a starting sport for the Test series against the Springboks after Tom Smith and Paul Wallace excelled on tour but his attitude throughout his second adventure was nothing short of exemplary.

Leonard’s philosophy on the Lions was a simple one: it’s not about me, it’s about a giant ‘us’. That unselfish way of thinking was summed up perfectly in his address to the rest of the team in the changing room moments before the opening game of the tour against Eastern Province. His speech that afternoon set the tone for one of the most talked-about Lions tours in history as McGeechan’s men picked up on Leonard’s call to stay united in adversity and to prove to the world that this particular batch of Lions would be nobody’s pushovers.

Jason Leonard understood exactly what it meant to be a Lion

"I’m sure everybody’s played this game in their heads already. You’ve played it your heads and you know what you want to do. Every single one of us knows what we want to do.

"Everyone back home wants you to do well. And it’s down to us. No one else.

"That’s it, stay nice and loose. We don’t go inside ourselves. Do not go inside yourselves. We’re here, we express ourselves on the pitch – that’s what we do.  We do not try and cramp anyone’s style.

"Just 47 of us against all of South Africa. I don’t care what happens today as long as you can look at each honestly and say, ‘I didn’t let you down’."

Leonard’s words obviously had the desired effect as the Lions ran out comfortable winners over Eastern Province before taking an unassailable 2-0 series lead against the Springboks.

The reigning World Champions were overwhelming favourites on the first tour of the professional era but Leonard’s call struck a chord and the Lions made a mockery of the pre-series predictions.

Our next speech comes from a tour that failed to hit the heights of ’97, a tour that isn’t remembered to fondly thanks to a 3-0 series whitewash by the All Blacks.

But while results weren’t what the Lions wanted in New Zealand, there can be no doubting the passion shown by the players, as Lawrence Dallaglio proved ahead of the defeat to the New Zealand Maori.

The English back-rower’s words in the hotel on the day of the game may not have led to a victory but they do give us another indication into how the spirit of the Lions stems from far more than just the 22 men who do battle on the pitch itself.

“This isn’t just a game of rugby – it’s our life. We live it, we breathe it,” said Dallaglio, who wasn’t even in the team on this occasion but was still desperate for the Lions to succeed.

“I was in a hotel room similar to this four years ago when Graham Henry got up and spoke and the words he said will live with me for the rest of my life.

“Let’s get some emotion into this game and let’s take it to another level.”

Emotion plays a big part in any Lions tour as players, coaches and supporters alike look to harness the unique opportunity that representing four such diverse nations can provide.

But it’s not just about turning four into one. Legendary Lions coach Carwyn James knew that forging a victorious squad wasn’t about creating a whole new identity. Instead the former Wales and Llanelli boss believed success would stem from bringing the very best out of the four distinct identities that already exited within his tour party.

Rather than look to build something new from scratch by turning everyone into the same kind of Lion, James harnessed the foundations of English, Irish, Scottish and Welsh nationality and told his players to simply be the best versions of themselves.

And by God did it work. James led the 1971 Lions to their only-ever series victory in New Zealand, leaving a legacy that will last forever.

Carwyn James guided the 1971 Lions to a sensational series success

“All you have to do is be your own man. For the next three months all I ask you to do is to express yourselves, not as you would in the office, but as you would at home,” was James’ way of putting his players at ease before they headed Down Under.

“I don’t want Irishmen who pretend to be English, or English thinking they are Celts, or you Scotsmen to be anything less than Scots. You each have a singular and ultimate quality to give in abundance to this team of ours, and you must only express it, both on the field and off it, in your own special, God-given way. And if you do, there will not be remote shadow of doubt that we shall prevail in the huge endeavour we have set ourselves.

“I demand only that you be uncliquey, that in our glorious fusion of national differences and differing temperaments we shall make our whole a vastly more potent force than the sum of our parts.

“Let you Irish be the supreme ideologists off the pitch, and on it fierce scrappers like Kilkenny cats.

“Let you rejuvenated English stiffen those upper lips, and then simply continue to be superior.

“Make sure, you Scots, that your conservative traditionalism of history, strong and dour, is now oiled by your nation’s marvellous, new-found radicalism.

“And you Welshmen of mine, well, just continue to be cocksure and bloody-minded in your new Triple Crowning triple-clowning arrogance.”

Perhaps fittingly given the fact that he is a candidate to be the voice of the Lions in 2013, the last word in our Power of Speech series goes to Warren Gatland.

The current Wales supremo may be a New Zealander but he knows all about the inner workings of what makes the Lions tick.

Gatland was an assistant to McGeechan when the Lions toured South Africa in 2009, a tour on which the squad earned a vast amount of respect both at home and aboard.

But picking up a few pats on the back for their sumptuous style of play and for running the World Champion Springboks so close in the first two Tests wasn’t enough for Gatland. A win was all that mattered in the final rubber at South Africa’s spiritual home and Gatland’s plea to his players just moments before kick off set the platform for the Lions to head home on a high.

“We’re in Johannesburg, South Africa, at Ellis Park. Earn some respect, yes. But the only way to earn respect against these ***** is by beating them. It’s the only way. No matter all the nice things they say, you’ve got to beat them. We do it out there, on the scoreboard.

“Yes, we’ve improved from week one, from Test one and Test two, but the sign of character is how we perform and what we do out there today. Nothing but a win is acceptable.

“For those guys wearing the jersey for the last time: remember it.”