A double dose of Lions

James Horwill says playing against the Lions for the Reds will be almost as big a deal as leading out the Wallabies in the three-match series with Britain and Ireland's elite. [more] 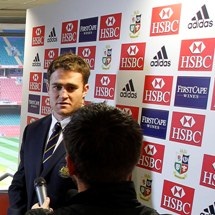 James Horwill says playing against the Lions for the Reds will be almost as big a deal as leading out the Wallabies in the three-match series with Britain and Ireland’s elite.

The Australian second row looks all but certain to wear the captain’s armband when two of the game’s greatest forces go head to head in late June and early July next year but he’s hoping to get a taste of what he’ll be up against a little earlier than that.

Horwill is desperate to take on the might of the world’s most famous touring team with his Queensland-based franchise on June 8 as the Reds look to cement their current status as the southern hemisphere’s leading club side.

But while a whole host of internationals did feature for both club and country on that 2001 tour, then Australia captain John Eales wasn’t given permission to turn out at Ballymore in game number three.

It’s a fate that could await Horwill himself if Wallaby head coach Robbie Deans decides not to risk his frontline stars but the giant second row admits he’ll be putting pressure on his boss to allow him to run out for the Reds in what will undoubtedly be a truly memorable occasion.

“From a provincial level, the chance to play against and possibly beat a Lions side with your local team and the people you play with week in, week out is a great opportunity,” said Horwill.

“That’s the sort of thing that goes down in the history books of your province and that sort of opportunity doesn’t come around very often any more.

“In professional rugby, with the schedules as busy as they are now, provincial sides don’t often get the opportunity to play international sides- that’s one of the most exciting aspects of the Lions tour.

“It’s lucky that the majority of the provincial games are played before the Test matches so we’ll get a little bit of a look at the Lions and hopefully a few of us will play for our provinces in the warm up games.

“I’d definitely be keen to do that. I guess it depends on the work load of what’s been before as Super Rugby’s a pretty tough tournament, but I’d love to get the opportunity to play for Queensland against a Lions side. It’s something I’d be very keen to do and I guess we’ll just have to see how the body’s faring at that time.

“The Reds fixture is one of the first ones of the bat so hopefully I might be able to convince Robbie to let me play.”

Simply playing against the Lions will be a major milestone for two of Australia’s five franchises, with the Western Force and Melbourne Rebels having not been in existence the last time the tourists travelled south.

Horwill is convinced the fixtures will be a fantastic fillip for those two teams in particular as they look to build their fan base and increase awareness in a country in which rugby union competes heavily with rugby league, cricket and Australian Rules Football for column inches and crowd support.

But while just being on the same field as the Lions will be a proud moment for the players of each of the Super 15 sides, beating the best of the best would be something else altogether.

“Two of the teams are fairly new. The Western Force and the Melbourne Rebels have only just come into professional rugby so for them to play the Lions is going to be huge for their fan base and their team as a whole,” added Horwill.

“The Lions is the best of the best so any opportunity a provincial side gets to play the Lions is so important.

“We’ve got five provinces in Australia who are being given a chance to play and maybe beat a Lions side – that’s huge for some of the younger players coming through.

“If a provincial side does manage to beat the Lions it’s something that I’m sure they’ll put up on the wall in the front office to say to everyone, ‘We beat the Lions’.”

Horwill would love to tame the Lions with club and country

Beating Britain and Ireland’s elite wasn’t an achievement the three first-class sides in Australia managed last time out as the Waratahs and Brumbies followed the Reds in being put to the sword in contrasting circumstances in Sydney and Canberra.

But where the provincial outfits failed in 2001, the Wallabies succeeded as they secured a first series triumph in over a century in a nail biting three-match battle that featured an abundance of commitment, quality and controversy.

And matching the marker laid down by the class of ’01 is unsurprisingly high on Horwill’s agenda as this particular group of Wallabies look to make history of their own.

“The players from 2001 always speak very highly of what it meant to play against and to win a series against the Lions.

“It’s a huge, huge honour and it’s right up with the World Cup in its importance and in terms of the magnitude of what it brings to the game.

“You just have to look at the history that comes with the Lions and the memories of previous tours. They’re the best of the best and it does bring something unique. The fans come out with them and the whole aura around the tour is amazing. The tour as a whole will bring a hell of a lot to Australian Rugby and it will be a very exciting time for us.

“A series victory over the Lions would be right up there for me. It’s a once-in-a-lifetime chance. It’s a huge, huge opportunity.

“Players in Australia have a huge understanding of the traditions and of everything that is involved in a Lions tour. It’s very high on the priority list of players here.

“It bodes well for Australian Rugby in general that players are sticking around for this tour. As a group we feel that the best is ahead of us. We have a number of guys who are playing some great rugby and will hopefully keep improving.

“The group has an understanding that, if we stick together, we have the opportunity to do some special things. And a Lions tour is definitely one of those special things.”