Richard Graham has been sacked by the Western Force after an apparent player revolt. [more] 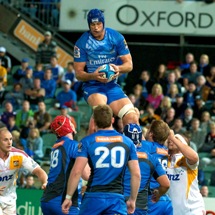 Richard Graham has been sacked by the Western Force after an apparent player revolt.

Graham resigned from his post as head coach at the Perth-based franchise earlier this week but was due to stay on until the end of the current season.

The announcement of his move to Super 15 rivals the Reds from next term wasn’t met kindly by his current squad, however, and he has now been shown the door with immediate effect.

Former Saracens and Bath coach Graham took a training session today but has since been replaced by Phil Blake, Nick Stiles and Andrew Scotney, with the due to take temporary charge until the end of the season.

The Force, who were the fourth of Australia’s five franchises to join Super Rugby, claim to have already received over 30 indications of interest in the vacant head coach position.

Whoever does get the job will have the honour of pitting his wits against the Lions next summer as the Force are due to take on Britain and Ireland’s elite in the tourists’ first game on Australian soil on June 5.

Steve Meehan, who spent a successful spell at Bath before being replaced by Lions legend Sir Ian McGeechan, is thought to be among the candidates, as is caretaker coach Blake, a former rugby league star who worked aas Graham’s assistant.

The Force have a bye this weekend but Blake, Stiles and Scotney will face a baptism of fire next week when the high-flying Stormers head to Perth.