Duo in danger of missing tours

Scotland second row Jim Hamilton and England hooker David Paice could miss their country's summer tours after being sent off at the weekend. [more] 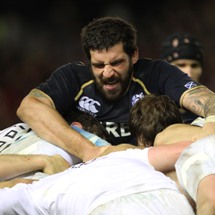 Scotland second row Jim Hamilton and England hooker David Paice could miss their country’s summer tours after being sent off at the weekend.

Hamilton and Paice received their marching orders as London Irish hammered Gloucester in the final round of the regular Aviva Premiership season on Saturday.

The pair were initially sin binned seven minutes into the second half but were then shown red cards after clashing again as they were leaving the field.

A disciplinary committee chaired by Judge Jeff Blackett will meet at Twickenham on Thursday and guilty verdicts could mean Hamilton misses out on summer Tests against Australia, Fiji and Samoa while Paice may be ruled out of England’s trip to South Africa.

Hamilton, who skippered Gloucester in the 52-18 loss in Reading, is a certainty to tour if he avoids selection having won 39 caps and featured in each of Scotland’s 6 Nations games this season.

Paice currently has just the two caps for England but is in the running for a tour sport having been a Saxons regular under new head coach Stuart Lancaster. With Dylan Hartley short on game time due to his current suspension, Rob Webber out injured and George Chuter likely to be overlooked due to his age, Paice could challenge for a Test place if he escapes a ban.

While both men are in danger of summer suspensions, London Irish director of rugby Brian Smith is in no doubt as to where the blame lies for the unsavoury incident which led to a mass brawl.

"What happened was there was an off-the-ball incident where Jim Hamilton pushed David Paice in the back and knocked him to the ground. When you are not expecting to be pushed in the back you get a whiplash-type effect," said Smith.

"It's not on, he instigated it. David Paice went to the next ruck and cleaned Jim Hamilton out off the ball, and Jim Hamilton started throwing punches from that ruck.

"Jim Hamilton was the instigator and then, when they were both yellow carded, Hamilton has punched David Paice twice in the head and split him open and he has a dozen stitches in his forehead, and the all-in started from there.

"Hamilton has got a lot to answer for, it's not the 1970s. It was very disappointing, it was a blight on the game.  Hamilton was the instigator and we have David Paice possibly with concussion and a dozen stitches in his head.

"As a captain of the Gloucester team Hamilton's behaviour was unacceptable. He is a Test player but I would be surprised if he plays any Test footy this summer, because it was a disgrace what he did today."