Lions heading Down Under with Qantas

Qantas, Australia's premium airline, has been appointed as Official Airline to The British & Irish Lions for their 2013 tour. [more] 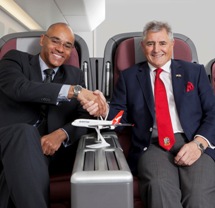 Qantas, Australia’s premium airline, has been appointed as Official Airline to The British & Irish Lions for their 2013 tour.

The partnership will make history as the 2013 Lions squad and coaching staff are flown to Hong Kong for The Lions’ first match in the Far East against the Barbarians. Qantas will then fly the team and support crew onto Australia for six regional fixtures, culminating in three highly anticipated Test matches against the Qantas Wallabies.

Paul Yankson, Qantas Regional General Manager of UK and Ireland, said; “Qantas is pleased to sponsor The British & Irish Lions for the first time. We’ll be developing packages to ensure all the fans can travel to support their team in Asia and in Australia.”

British & Irish Lions Tour Manager, Andy Irvine, agrees that this is a great partnership for The Lions from a player perspective; “The comfort of the players on flights is vital to us, as the rigours of a Lions Tour mean that players are often out on a training pitch shortly after landing. They have to be refreshed and ready to go, and we know that the quality of operation that Qantas provide means we will arrive in great condition.”

Director of Sales and Marketing for The British & Irish Lions, Charlie McEwen, said: “The Lions are delighted to have the support of Qantas ahead of the 2013 Tour to Australia. The support is not only invaluable to the squad and management ahead of their preparations for the Tour as Andy has outlined, but also to the fans, and we are already working hard with Qantas and Lions Rugby Travel to make next year’s fan experience better than ever. A Lions Tour is a once in a lifetime opportunity and we are excited to welcome Qantas to support both our travel and travel packages for Lions fans.”

Qantas Airways will join Thomas Pink and Rhino as well as current sponsors HSBC – Principal Partner, Adidas – Official Kit Supplier and FirstCape who have all signed for a second consecutive Tour in the commercial family of Lions’ Partners, Sponsors and Suppliers for the Tour to Australia next year.