Ian Evans will make the ultimate sacrifice for Wales by jetting to Australia the day after his wedding. [more] 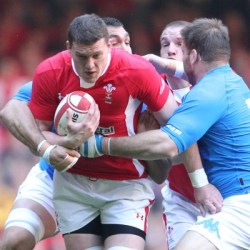 Ian Evans will make the ultimate sacrifice for Wales by jetting to Australia the day after his wedding.

The towering lock, who featured in every game as Wales clinched the Grand Slam, will tie the knot on the Greek island of Santorini on June 7.

That means he will miss the first Test with the Wallabies but he will leave his bride Angharad at the altar to join Wales for the second.

"When I mentioned to her that this scenario might arise, I made a run for it out of the kitchen and waited for the pots and pans to come flying through!" joked Evans.

"I get married on the Thursday, sign the legal papers the next morning and pretty much fly straight to Oz.

"I don’t think it’s any bride’s dream to have their groom flying away the next day. She’s staying out there on her own with no groom, just family and friends.

"I can’t wait to get married but then I’ll have my missus in my ear as I’m getting on the plane!

"She’s a little bit devastated but fully understands. In professional sport you have to take your opportunities when they come."

It has been a remarkable turnaround for the giant second-row, who had spent two years in Test wilderness following a succession of serious injuries.

Evans made his international comeback in the December defeat to the Wallabies and has started every game since as the Dragons roared to the Grand Slam.

His performances throughout the Six Nations earned him widespread plaudits and he is now firmly in the running to return to Australia with the Lions next year.

Evans has enjoyed an equally impressive campaign on the domestic scene and has been an ever-present feature in the Ospreys side that claimed the PRO12 title on Sunday.

"The Australia Test gave me the huge confidence boost I needed," added Evans.

"Before that I wasn’t fulfilling anywhere near my potential but that game gave me a kick-start.

"It’s been a real whirlwind and if you had said I’d be in this position at the beginning of the season I would have laughed.

"I’ll be drinking orange squash on the wedding night, it’s just one of the things you have to sacrifice for the game."

But before the wedding bells ring, Evans is set to face the Barbarians, when they visit the Millennium Stadium on Saturday.

He will then jet to Australia, via Greece, and the Ospreys star knows full well that he will have to fight his way back into the Wales starting line-up, with Alun Wyn Jones, Luke Charteris and Bradley Davies providing fierce competition in the boiler-house.

"I will have a battle to get back in," added the RaboDirect PRO12 winner.

"That’s one thing I can accept. I hope it does go well for the boys and that they win the first Test to lay down a marker.

"If that happens and I don’t get back in I will fully understand and I’ll have to take it on the chin. That’s just the way life goes really.

"But I’ve shown what I can do and if I’m lucky enough to get another chance, the responsibility falls on my shoulders."