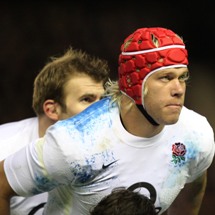 The Saracens player knows all about the conditions his England team mates will have to endure, as well as the psyche of the Springboks, and is expecting a major physical challenge when the first of three tests kicks-off in Durban on Saturday.

“It is going to be by far the biggest challenge we have faced as a group. We will have to be ready,” said Botha in the wake of England’s 57-26 warm-up victory over the Barbarians.

“For me, it is quite a surreal feeling but I am looking forward to getting out there. In a way I feel like I am representing two countries, so the best way to do that is to play well.

“I am not looking to prove a point at all. I just want to make people that know me proud because of the way I perform.”

“Those guys are going to be fired up, but that isn’t any different to a lot of countries. There are a lot of men with too much testosterone getting ready to smash each other up,” said Botha.

“That’s what I love – you want to go out there and have a physical confrontation. After that you feel good and shake your opponent’s hand. It gets left on the field and everybody is satisfied.”