Ireland will have to go into their third Test against New Zealand this weekend without Jamie Heaslip and Gordon D'Arcy. [more] 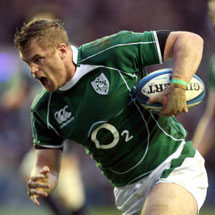 Ireland will have to go into their third Test against New Zealand this weekend without Jamie Heaslip and Gordon D’Arcy.

The two 2009 British & Irish Lions picked up injuries in the heroic, 22-19 defeat against the world champions in Christchurch last weekend. No 8 Heaslip broke his right index finger, while centre D’Arcy limped off with a calf problem.

Irish coach Declan Kidney has called up Ulster centre Paddy Wallace to join the party as midfield cover. He arrives in New Zealand on Tuesday.

Brian O'Driscoll and Mike Ross both had X-rays on facial injuries sustained during the game, but their scans were clear and both are in contention for the final game at the Waikato Stadium, Hamilton.

The All Blacks have lost second row Ali Williams, who is having knee surgery, and No 8 Kieran Read is being monitor on a daily basis after suffering concussion.