Lions tourist Keith Earls is among three changes to the Ireland side for Saturday's clash with New Zealand. [more] 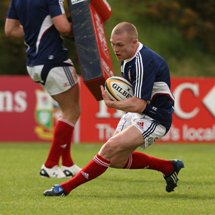 Lions tourist Keith Earls is among three changes to the Ireland side for Saturday’s clash with New Zealand.

Earls, who toured South Africa with the Lions three years ago, replaces Andrew Trimble on the left wing for the third and final Test in Hamilton.

The versatile Munsterman missed last week’s narrow defeat with a chest injury but has recovered in time to help Ireland try and finally record their first win over the All Blacks.

Injury sees fellow Lion Gordon D’Arcy replaced by Paddy Wallace at inside centre, with Wallace having only been called up to the tour party last week after missing out on original selection.

Jamie Heaslip is another Lion unavailable through injury after breaking a finger in the heartbreaking 22-19 reverse last time out so Peter O’Mahony starts at No8 and Chris Henry comes on to the replacements’ bench.

Ireland came so, so close to securing their most famous result against the reigning World Champions in Christchurch a week ago, with only a last-gasp drop goal from Dan Carter preventing them from taking a share of the spoils and keeping the three-match series alive.

It was a massive improvement from the 42-10 mauling they suffered in Auckland in the opening rubber but head coach Declan Kidney knows it will mean very little unless they can produce a similar showing on Saturday.

“There’s no point in doing it once,” said Kidney, who likened the return to an extended series rather than one-off Tests to next year’s Lions trip to Australia.

“Nobody goes to an inconsistent doctor. That’s just the truth of it. But then that said, what way are they going to turn up then too? It’s how you measure consistency. There’ll be a completely different challenge.

“This is like a Lions series, where you play three Tests on the trot. There’s a build up to it and you must do your work. Everybody will write things like dead rubbers but once these games start they’re full throttle too.

“I don’t want to be using clichés but that’s the opportunity that Saturday presents. You either want to shy away from that or you want to accept it.

“We now go to Hamilton when they appear to be a little bit bruised. This means it’s going to be all the tougher. That will give us a better indication as to where we sit.

“We said we’d learn a lot about ourselves on this tour. We have done so far and I think we’ll continue to do that right to the last minute.”

New Zealand will be without Dan Carter after the star fly-half damaged a hamstring, while skipper Richie McCaw starts at No8 rather than openside flanker for the first time.