Terry Holmes reckons Mike Phillips will roar back to his Lions best in the new season. [more] 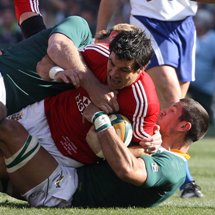 Terry Holmes reckons Mike Phillips will roar back to his Lions best in the new season.

Phillips, who moved to Bayonne last summer, failed to hit his usual heights on Wales’ recent tour to Australia, where the Dragons fell to a heartbreaking 3-0 series whitewash.

But Holmes, who won 25-caps for Wales and toured South Africa and New Zealand with the Lions, expects the former Ospreys star to shake off the criticism and raise his game to new heights in time for the 2013 tour.

"I would expect him to be the Lions scrum-half in the Tests next summer," Holmes told the South Wales Evening Post.

"It's been a difficult year for him with his move to France and having to settle in a strange environment.

"And there is bound to be a lot of competition for the jersey next summer because it's a Lions tour and everyone wants to feature in the Tests.

"But when Mike Phillips is at his best he is world class, a player you'd want on your side every time, and I am expecting him to work at his game and have a big season.

"Certainly, Wales are not the same side without him.

"He adds an edge, a drive to the side with his will to win and his physicality.

"He still has some way to go to rediscover his best form. He did some good things in Australia but he wasn't at the level of 2009 in South Africa when he was at his absolute peak.

"He wasn't the official man of the series but I think it's a fair call if anyone suggests he should have been.

"Mike will know that he has to get back to that level this season."

The first task for Phillips will be to hold off the stiff challenge of Rhys Webb and Lloyd Williams in the Welsh camp.

But he could also face a challenge from Dwyane Peel, the Lions Test scrum-half in 2005, who has fallen down the international pecking order in recent seasons.

And he reckons the fierce competition at scrum-half will only be beneficial for the players in question.

"I haven't seen enough of Dwayne of late to say where he is with his game," said Holmes.

"But I think the Wales selectors largely pick on form.

"Dwayne's problem is that it is very competitive at the moment. Wales don't just have Mike Phillips; they have Rhys Webb and Lloyd Williams as well, two excellent young scrum-halves who are only going to get better.

"But we all know what Dwayne can do at his best.

"If he can find the form he had in 2005, we will have a massive battle on our hands for the Wales shirt."