Australia have been dealt a blow after scrum coach Pat Noriega announced he would be leaving the position. [more] 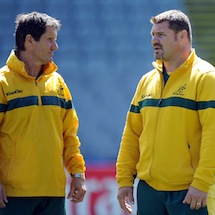 Australia have been dealt a blow after scrum coach Pat Noriega announced he would be leaving the position.

The Wallabies scrum has come in for criticism in recent years but Noriega has gone some way to strengthening their Achilles heel.

Noriega will link up with former France and Italy head coach Pierre Berbizier at the Top 14 outfit.

"I've learnt a lot working with one of the best coaches in the world in Robbie Deans," said Noriega.

"I'm looking forward to the opportunity to put everything that I have learned off him into practice."

Noriega moved to Australia in 1996 after five years representing the Pumas, and went on to play for the Wallabies before retiring in 2003.

"I don't think I've met a person more passionate about scrums. I have no doubt he will be a success in this next chapter of his life," added Australia head coach Deans.