Former Lion Mark Cueto admits his England career is over but insists he would never turn his back on the Red Rose. [more] 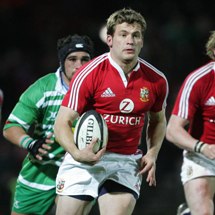 Former Lion Mark Cueto admits his England career is over but insists he would never turn his back on the Red Rose.

The Sale Sharks wing, who toured New Zealand with the Lions in 2005, won the last of his 55 caps during last year’s World Cup.

He scored a try in the quarterfinal defeat to France but the 32-year-old concedes he is unlikely to play for his country again.

"You always hold a little light but you've got to be realistic. I know I'm not going to play for England again," said Cueto.

"I'm not just going to announce my retirement because I know that. I never wanted to officially announce that I was retiring. It's not the sort of thing that I wanted to do.

"I'd always say I'm available but it's not going to happen now. I'm just going to look forward to working hard and playing well for Sale in my last few years."

Cueto made his England debut in November 2004 and has scored 20 tries while on international duty
Martin Johnson’s England endured a disappointed World Cup campaign in New Zealand and new coach Stuart Lancaster has opted to blood youngsters.

"Ultimately for me the 2011 World Cup was the big aim," added Cueto.

"I knew the World Cup was a massive target, and realistically that if I managed to get there and play in that World Cup, that would probably be it. That's the way it's worked out and that's fair enough."

Cueto sole focus now is with Sale Sharks, whom he has spent his entire top-flight career with.

After some testing times the Sharks return to the Heineken Cup this season and will also move to a new home at Salford City Stadium.

"We want to give a good reflection of ourselves in the Heineken Cup," he added.

"We've got some fantastic teams coming to Manchester.

"It's a really tough draw but we've been lucky with the teams we've got, in terms of how big they are and drumming up support and interest."