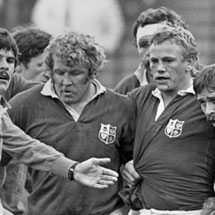 The Ospreys tight-head prop, who toured South Africa with the Lions in 2009, will embark on his testimonial match at The Gnoll tonight.

And former Pontypool, Wales and Lions prop Price, who established a reputation as one of the most fearsome scrummagers in his day, reckons Jones is one of the finest props of his generation.

"I don't think there's any doubt about Adam's status in the game," said Price, who played 37 times for the Lions.

"He's up there as an all-time great, one of the finest tight-heads to have played for Wales. He deserves that kind of accolade.

"His worth is highlighted when he's not around. Wales experience big problems in the scrums because there is no tight-head in the same league as Adam in the country when it comes to set-piece work.

"We have won three Grand Slams since 2005 but we have gone from boom to bust in that period, with some dodgy seasons in between the successes.

"But Adam’s form has always been up there. He has been as consistent as any tight-head in the modern game."

An Adam Jones XV will take on his former club Neath RFC tonight with three more former Lions on display.

Former Neath teammates Allan Bateman and Barry Williams were members of the victorious tour to South Africa in 1997.