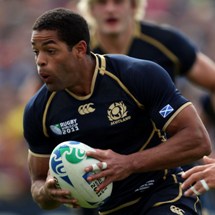 The Scotland centre suffered a triple fracutre of the C1 vertebrae at the top of his spine in a pre-season friendly with Munster on Friday.

Ansbro remains in University College Cork hospital, where he has been placed in a metal halo neck brace to immobilise his spine.

"It is early days and the most important thing is he has no problems with any functionality. He's 100% clear," said Smith.

"Joe is in really good spirits. He's got his head around what has happened.

"It is still too early to tell how significant the injury is as to whether he can play again this season or at all.

"A lot of people are very concerned when they hear it is a neck injury. He's got a stable neck and all the ligaments are intact."

Ansbro has scored three tries in his 11 Scotland matches, having made his debut against South Africa in the 2010 Autumn Test series and could have been in line to tour with the Lions next year.

"He's a very stoic bloke and he is in good spirits and is in very good care," added Smith "University College Cork have been outstanding and he has one of Ireland's best neurosurgeons seeing him as a specialist.

"He'll be able to recover from it but it is far too early to say if he will play on. Worst-case scenario it will be a long time away from the game or not play at all.

"Best-case scenario Joe will make a full and speedy recovery and will be wearing a London Irish jersey in the near future."