For the second weekend in a row the Wallabies had to claw their way back from a 13 point deficit to win in The Rugby Championship. [more] 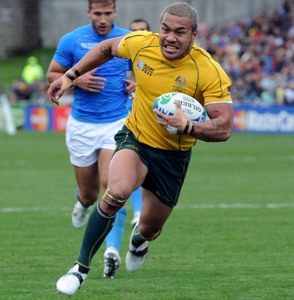 For the second weekend in a row the Wallabies had to claw their way back from a 13 point deficit to win in The Rugby Championship.

Two tries from the Pumas in the second half gave the tournament new boys a 19-6 lead and every chance to go on and win their first game over Australia. But the Wallabies showed the same resilience that earned them a 3-0 win over Wales in June to hit back.

The Springboks had raced clear in Perth the previous weekend before being overhauled. This time it took second half tries from Pat McCade and Digby Ioane to complete the recovery.

“They took their chance and put us under a lot of pressure. It took a great deal of courage and commitment to comeback,” admitted Wallaby skipper Nathan Sharpe.

“We played some good rugby in the last 20 minutes. We’ve had a couple of tough weeks chasing teams down, so it will be good to get off to a good start in South Africa in our next game.”

Two penalties from Juan Martin Hernandez gave the Pumas a 6-3 interval lead. But two tries in as many minutes from Tomas Leonardi, after charging down a Quade Cooper clearance, and Julio Farias Cabello, after a great break started by Martinez, sent the Pumas racing clear.

“We are very disappointed. We got a good lead, but we need now to learn how to close games out,” admitted Puma skipper Juan-Martin Fernandez Lobbe.

Kurtley Beale came on at the death to kick a long range penalty to put Australia four points clear and that was enough daylight to give his side a second successive win in the tournament.

“It was a frustrating game, but a win is a win. The breakdown killed us – they did well there,” said man of the match Ioane.

“We were chasing the game again in the second half. We’ve got a week off an we have to back up against South Africa.”

Earlier in the day the All Blacks made it four wins in four games as they beat South Africa 21-11 in Dunedin.