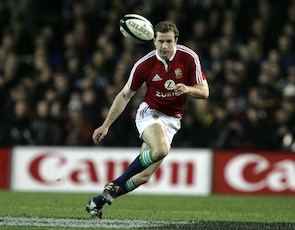 The veteran full-back has been out of action since suffering a knee injury against Saracens in September.

It had been hoped that Murphy, who made seven appearances on the 2005 Lions tour of New Zealand, would return to action for the clash.

But he has failed in his fitness race and is now targeting next week’s home clash against the Ospreys.

"My fitness has come on really well but it's just that little bit off so they've asked me to hold off so, hopefully, I'll be fine for next week.

"I knew I had my work cut out when I first did it – it was meant to be a six-week injury – which would have been more towards the end of the month.

"The physios here are absolutely fantastic and I've been working with them an awful lot and it's only been about three weeks since I was injured.

"It was always going to be ambitious to try and play against Toulouse but, obviously, a game of that calibre is something that is worth pushing for, which I have done, but I'm just a little bit short.

"Everyone wants to be on the field and, unfortunately, it's not always the case. Sometimes you're not picked and sometimes you're injured but that's something most rugby players are used to.

"It's disappointing but I suppose that's just part and parcel of it."

Murphy, who has won 74 Ireland caps, is pleased to see the Tigers’ casualty list has eased but he is well aware of the daunting challenge his side face in the south of France.

"We have got a lot of guys back onto the training field," said Murphy.

"Players with long-term injuries are coming back to full fitness. Some guys may not be right for this week but their presence on the training field is definitely good for the guys in the squad, so the mood in the camp is good.

"It will be a little bit tougher for the guys to pick a side because of it but that's a great position to be in, and the atmosphere is good so I'm looking forward to this weekend.

"Toulouse are a quality side with a huge pack, some big backs and some very talented players. The guys on their bench are also seasoned internationals.

"We'll have our work cut out but the mood is good and our form is also good so I don't see any reason why we can't go there and get something."