Join the Lions in the Pink

Outfitters Thomas Pink are offering rugby fans the chance to join some Lions' legends in celebrating the launch of their new British & Irish Lions collection. [more] 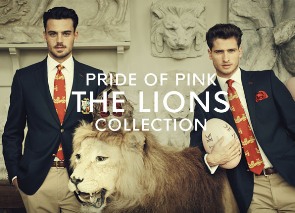 Outfitters Thomas Pink are offering rugby fans the chance to join some Lions’ legends in celebrating the launch of their new British & Irish Lions collection.

The Thomas Pink Lions Collection will be officially unveiled at the newly named and branded Pink Lion pub on King Street, London. The venue has been turned pink for one week only in a make-over of the famous landmark, The Golden Lion.

The traditional English pub has been transformed into a Mecca for stylish rugby fans and will feature a stellar line-up of evening entertainment, open to all, from 31 October. Lions head coach Warren Gatland will kick-off proceedings at a gala VIP evening on 30 October when he will unveil the new Thomas Pink Lions Collection.
.
Prior to that, Gatland will be pulling pink pints behind the bar to get all the guests in the mood. Supporters are then invited to take part throughout the week in a range of other exciting activities.

There will be an unique ‘Question of Sport’ pub quiz night hosted by Matt Dawson and friends, or you can just sit back and enjoy exclusive screenings of historic matches with commentary by rugby greats.

There will also be an opportunity to meet former Lions as players from around the UK and Ireland gather for an intimate ‘Pink Lion Lock-In’ to share rugby anecdotes and dressing-room tales.

Pride of Pink – The Lions Collection

The Lions Collection by Thomas Pink takes inspiration from the 125 year heritage of one of the most famous touring sports team in the world – The Lions. Be part of the pride as Thomas Pink prepares to dress them for their upcoming 2013 Tour. The Collection boasts gold plated cuff links with engraved Lions. Blazers with details such as crest emblazoned gold buttons, and rugby heritage silk lining. A limited edition 125th Anniversary commemorative Merino wool / silk scarf, and a bold red and gold English woven silk official tour tie are just some of the unique pieces available to purchase. Shop here http://www.thomaspink.com/lions_collection/content/fcp-content

Following his success on Celebrity Masterchef, double Lions tourists and former England skipper Phil Vickery will be tempting everyone to try his specially created menu to celebrate the week.

Fans will be invited to tuck into signature dishes inspired by the UK and Ireland such as cockle and bacon tartlets, colcannon and sausages or mini Yorkshire puddings with rare beef, horseradish & watercress. If you’re lucky, you might even catch a glimpse of the rugby legend donning his chef’s hat and apron in the kitchen.

The Thomas Pink Lions Collection includes an exclusive range of menswear which will be available to the public from 8 October, 2012. Signature items include a velvet smoking jacket, vintage print merino wool and silk scarf as well as stocking fillers such as gold plated cufflinks, socks, ties and boxers.

31 October: ‘The Pink Lion Question of Sport’
The ultimate pub quiz night open to all, hosted by former Lion’s legend Matt Dawson. Members of the public can apply to have a team at the evening via the Thomas Pink blog (blog.thomaspink.com) from 8 October. Each team will then be given a famous sports personality as a VIP ‘ringer’.

1 November: ‘The Pink Lion Lock-In’
Former Lions will gather for an intimate evening where they will share rugby anecdotes and dressing-room stories