Wallabies set to seize the initiative

Wallaby boss Robbie Deans says his side have to seize the initiative if they are to have any chance of beating the All Blacks on Saturday. [more] 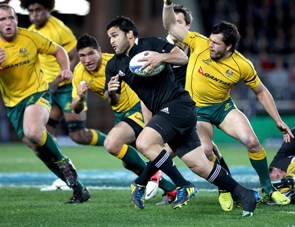 Wallaby boss Robbie Deans says his side have to seize the initiative if they are to have any chance of beating the All Blacks on Saturday.

The trans-Tasman neighbours meet for the third and final time this year, with the Wallabies still waiting for a first win.

New Zealand won the opening Rugby Championship encounter in Sydney before keeping their counterparts scoreless in a convincing drubbing in Auckland a week later and few are tipping the Lions’ next opponents to reverse that trend in Brisbane.

Deans knows nothing will change if his side sit back and let their rivals control proceedings at the Suncorp Stadium but he is confident the World Champions can be beaten if they are put under pressure from the first whistle until the last.

“It wasn't for want of trying but they were on top of every initiative and, to do well against them, you've got to take the initiative,” said Deans when looking back at the recent defeats.

“You can't sort of wait for it to land in your lap, you’ve got to take the game to them.

“The other area where we struggled against these blokes last time was getting out of our end. A poor exit, or you become over ambitious – they just love that stuff.

“They're masters at forcing you to play the game where they want you to play it and they feed off what you offer them as a result.”

Deans has come under fire from all quarters – including his own squad courtesy of Quade Cooper’s outbursts – for his supposedly conservative approach this season but the Kiwi insists he will be encouraging his side to attack with ball in hand whenever viable.

“There's an element of structure you need to bring to your game to get into the parts of the ground you want to be in. The game is risk and reward. Decisions are made in every moment. But the answer's yes,'' Deans added when asked if the Wallabies would be more attacking in the dead rubber Bledisloe Cup encounter.

Deans has also confirmed that he intends to meet with the controversial Cooper in the near future as speculation continues to grow surrounding the maverick fly-half’s future.

Cooper’s criticisms of Deans and the Australian Rugby Union and his accusations of a ‘toxic environment’ in the Wallaby camp have made huge headlines at home and abroad, with rumours rife that he may soon switch to rugby league or head overseas.

And while Deans has said that the issue isn’t a distraction for him or his players, he is keen to meet up with the 24-year-old before next month’s tour of Europe, even if it is to primarily enquire about the success or otherwise of Cooper’s recent knee surgery.

“I fully intend to catch up with him," added Deans.

“He's a Wallaby, he's had his operation and he's due to start moving in rehab shortly.

“It (a meeting) is nothing out of the ordinary – it's just an inquiry about his wellbeing.

“Enough has been said about that stuff (Cooper’s comments). As (Australian Rugby Union chairman) Michael Hawker said last week…it's in Quade's own backyard. Essentially, it's up to him.”