Little priest with a big punch

It has long been emphasised that rugby is a game for all shapes and sizes and the British & Irish Lions squad for the 2013 tour to Australia is sure to maintain that tradition. [more] 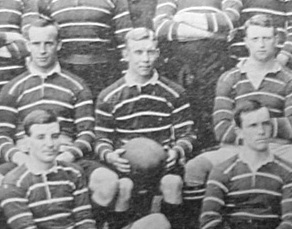 It has long been emphasised that rugby is a game for all shapes and sizes and the British & Irish Lions squad for the 2013 tour to Australia is sure to maintain that tradition.

But just five foot tall and weighing in at a mere nine stone soaking wet?

Not only was all that more than enough to be a top rugby player in the early days of the sport, it was also good enough for Matthew Mullineux to captain the British & Irish Lions and make two tours for the combined side.

And just for good measure, Mullineux was also a priest who would mix it with the best on the pitch one day and then switch to the pulpit the next.

A scrum-half with Cambridge University, he toured South Africa in 1896 with Johnny Hammond’s team, playing in the first Test and in 12 matches overall, before being ordained two years later.

In 1899 the first official British team to tour Australia was selected, and Mullineux was not only chosen to captain the team but also to manage it. He again featured in the opening Test, a 13-3 defeat to the Wallabies, and after that loss he dropped himself from the team for the remaining Tests with the captaincy given to Frank Stout.

But he still made a huge impact both as a player and a preacher, as the following words make plain: “The Reverand Mullineux is a muscular Christian of the truest type. On Saturday, June 24, he led his team into the field, and on Sunday preached morning and evening in St James’s Anglican Church, Sydney.

“Australian footballers who have run against him would as soon bump the Rock of Ages as little parson Mullineux. In one match a large, hairy, boastful, aggressive NSW Waratahs forward came into collision with his reverence soon after the game started. Whereupon the ambulance-man streaked out with his bag and the parson streaked down the line with the ball under his arm and a restful, holy smile on his face.”

They liked the British team captain and manager so much in Australia that they even made up a poem about him.  AB ‘Banjo’ Paterson wrote this tribute piece in The Bulletin:

I’d reckon his weight at eight-stun-eight,
And his height at five-foot-two,
With a face as plain as an eight-day clock
And a walk as brisk as a bantam-cock –
Game as a bantam, too,
Hard and wiry and full of steam,
That’s the boss of the English Team,
Reverend Mullineux.

Makes no row when the game gets rough –
None of your “Strike me blue!”
“You’s wants smacking across the snout!”
Plays like a gentleman out-and-out –
Same as he ought to do.
“Kindly remove from off my face!”
That’s the way that he states his case –
Reverend Mullineux.

Kick! He can kick like an army mule –
Run like a kangaroo!
Hard to get by as a lawyer’s plant,
Tackles his man like a bull-dog ant –
Fetches him over too!
Didn’t the public cheer and shout
Watchin’ him chuckin’ big blokes about –
Reverend Mullineux.

Scrimmage was packed on his prostrate form,
Somehow the ball got through –
Who was it tackled our big half-back,
Flinging him down like an empty sack,
Right on our goal-line too?
Who but the man that we thought was dead,
Down with a score of ‘em on his head –
Reverend Mullineux.