Wallaby star Quade Cooper is targeting a big year with the Wallabies having being punished for his recent controversial outbursts. [more] 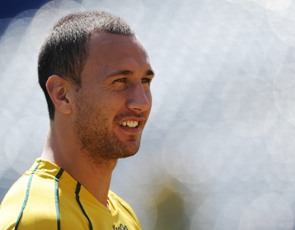 Wallaby star Quade Cooper is targeting a big year with the Wallabies having being punished for his recent controversial outbursts.

The Reds fly-half was in contrite mood as he accepted a £25,800 fine for bringing the game into disrepute after describing the Wallaby camp as a ‘toxic environment’ and publicly criticizing head coach Robbie Deans.

Cooper was given a further £12,900 fine and three-match ban suspended for two years at a disciplinary hearing that lasted more than four hours at Australian Rugby Union headquarters at St Leonard’s just north of Sydney.

The 24-year-old told reporters he fully accepted the decision and is now focused on starring for club and country as the Lions tour looms ever closer.

"It was a very fair hearing and I was very happy with the outcome," said Cooper.

"Obviously, the sentence that has been handed to me, I have full respect for that and I understand that I fell well below par in what it means to be a Wallaby.

"For all the supporters that are out there, my apologies.

"From now on, I'm just looking forward to the future – hopefully having a big year, with not only my state, but the Wallabies.

"And I'm very much looking forward to overcoming my injury and getting back out on the field."

Cooper’s suspended ban means any further indiscretions could see him sidelined for the Reds or the Wallabies for part of 2013 but the player and the union will now hope the matter can be put behind them.

Attentions will instead turn to Cooper’s contract negotiations, which were put on hold until the disciplinary process was completed.

The maverick playmaker, who will miss the upcoming tour of Europe with a knee injury, has already signed a new three-year deal with the Reds but has yet to agree terms with the ARU.

He has been heavily linked with a switch to rugby league after admitting that he would love to play alongside Sydney-bound Sonny Bill Williams but the manner in which he accepted his punishment and his comments on having a big year with the Wallabies suggests his future still lies in the 15-man version of the sport.