David Denton is hoping to stay clear of second season syndrome as he gets set to press his claims for a place on the 2013 Lions tour of Australia. [more] 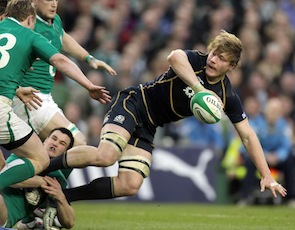 David Denton is hoping to stay clear of second season syndrome as he gets set to press his claims for a place on the 2013 Lions tour of Australia.

The Zimbabwe-born, South African educated back rower was in sensational form in his debut season for Scotland last term, with plenty of pundits tipping him for a spot in Warren Gatland’s squad to face the Wallabies next summer.

But the 21-year-old has failed to hit the same heights so far this time around as his club side Edinburgh have struggled in both the PRO12 and the Heineken Cup.

Denton admits his form in September through to mid October wasn’t up to the standards he sets for himself but he is confident he has turned a corner ahead of Scotland’s clash with the All Blacks a week on Sunday.

"At the start of the season I wasn't happy with how I was playing, particularly in those two Heineken Cup games," said Denton.

"The results showed that individuals weren't playing well, but if I had done my job well and got us on the front foot I think the results would have been better.

"But I felt very happy with my performance [last Friday] against Scarlets. I felt like I was back to my best.

“I felt like it was getting us on the front foot in attack and I was putting in some big tackles in defence, which essentially is my job. That's what I want to bring to this team."

The back-row is one of the mostly fiercely contested positions in the British and Irish isles and Scotland have their own fair share of contenders plotting to jet to Australia this summer.

With the likes of new captain Kelly Brown, Alistair Strokosch, Ross Rennie, Roddie Grant in Scotland’s autumn squad, Denton has plenty of work on his hands and he admits he is under pressure.

But he is also aware that he no longer the new kid on the block and that opponents know the threats he poses. As a result he is determined to develop his all-round game

"There's a lot of pressure on me to get back into this team. It is a very tough back row to get into, as it always is in Scottish rugby. Scottish players tend to have a very strong work ethic and that's a trait that suits a back row player.

"At the moment the depth we have there is outstanding. It's a massive challenge for me to get into this team but I don't want to miss the opportunity of playing against the best side in the world."

"People now know who I am so it's going to be harder for me. The way I play the game, if someone knows who I am it's easier to defend against me. I'm very direct, so I've had to add a few things to my game. I've got to start moving the ball a bit more."