Scotland have named Richie Gray in their side to face New Zealand despite injury concerns surrounding the giant second row. [more] 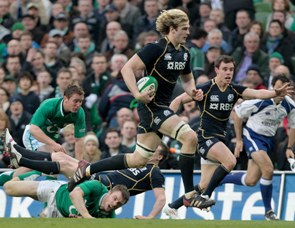 Scotland have named Richie Gray in their side to face New Zealand despite injury concerns surrounding the giant second row.

Sale boss Steve Diamond predicted that his star summer signing would be unavailable for the All Blacks clash due to an ankle injury picked up against London Irish on Friday.

But the 23-year-old Lions favourite is recovering quicker than expected and Scotland coach Andy Robinson has selected him alongside Gloucester’s Jim Hamilton, subject to a late fitness test.

Robinson makes five changes in all from the starting side that beat Samoa 17-16 in their most recent outing, with two former Lions missing out and one being drafted in.

Mike Blair starts at scrum-half in place of fellow Lion Chris Cusiter, while Geoff Cross comes in for 2009 tourist Euan Murray whose religious beliefs rule him out of playing on a Sunday.

Nick de Luca replaces the injured Joe Ansbro at outside centre and Hamilton takes over from Al Kellock at lock, with new captain Kelly Brown named at No8 instead of Richie Vernon.

Dave Denton only makes the bench after a stunning debut Six Nations and he is joined by Glasgow No9 Henry Pyrgos who is now in line to win his first international cap.

“We need to step up from the summer tour and be ready to go toe to toe in a physical contest, just as Australia did most recently against New Zealand in Brisbane,” said Robinson, whose team lost all five Six Nations matches in the spring but won three out of three tour games during the summer.

“For our first game of the season we will really need to start well and keep the game simple. New Zealand are the world champions and they perform the basic skills, well, under the highest pressure.”